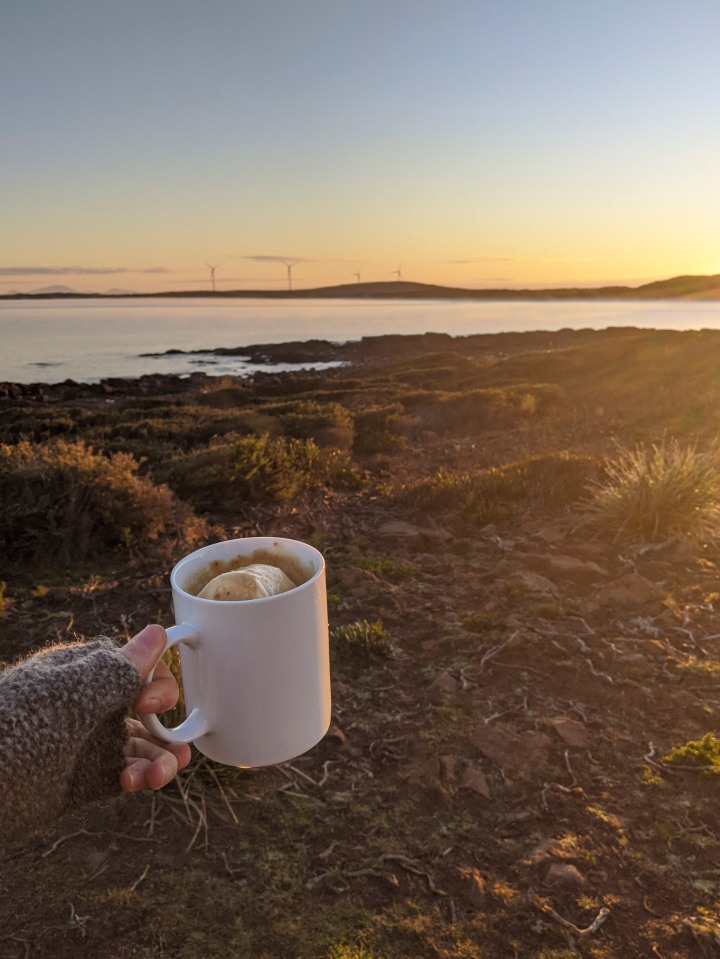 Last night was by far the coldest that we have had this trip with the mercury dipping down to 1 degree. Fortunately I have the ability to produce insane amounts of body heat and could still warm up the bed but I woke up with my head under the covers so it must have been chilly. Matt got up and made us coffee and the sunrise lured me outside into the cold. With a blanket on my legs and a coffee warming my hands we watched the sky change colour and the orange light cover the earth.

On our way out of Mussleroe Wind Farm we spotted the Tebrakunna Visitor Centre with a turbine blade next to it. I absolutely love wind farms, not only because they’re an amazing source of energy but the installation and engineering of the turbines fascinates me. We looked around, took some photos of the van being dwarfed by the blade and then got back on the road.

Because of the unplanned nature of this trip we keep finding ourselves in increasingly out of the way towns and today was no exception. We ended up having morning tea in a place called Tomahawk which the town sign proudly declared was “Tassie’s best kept secret”. It wasn’t an uninteresting place with it’s own island, river, and beach but the stillness that comes with having a population of 48 was a little bit off putting, as were the abandoned sheds and houses on the way in.

Yesterday we had been tossing up whether we would camp at Petal Point or a site further west called the Waterhouse Conservation Area since we were in the area we decided to also swing in there and have a look around. It turned out to be a really interesting environment with plants that neither of us had seen before in Tasmania. It was wetlandy and swampy but also near the beach. I looked up some more information on it and found that it is home to a huge variety of flora and fauna including the smallest flowering plant in the world. We visited a Ramsar Convention listed lake where we watched a sea eagle searching for food. The campground was quite small but directly on the beach and would certainly be a good place to stop on a future trip.

We reached Narawntapu National Park just as the visitor center was closing. Unlike Freycinet we couldn’t book ahead and just hoped that there would be a spare spot with the low season in full swing. Sure enough there was only one other couple there so we were able to pick a beautiful grassy site and set up our home for the night complete with power so we could run the heater and be certain we wouldn’t freeze in the night.

Once we were organised we went for a walk on the beach and enjoyed the sunset and roos bouncing around everywhere. There was some very nice jasper and a couple of pieces of petrified wood on the sand but I upheld the rules of national parks and left them where they were…so hard to do that.

Narawntapu National Park – Another $16pn powered site but so much more private then Freycinet. Nice flat grassy/gravel spots, basic toilet block, and more wildlife than you could shake a stick at 8/10.

2 thoughts on “Day 4 – Across the North East Coast”