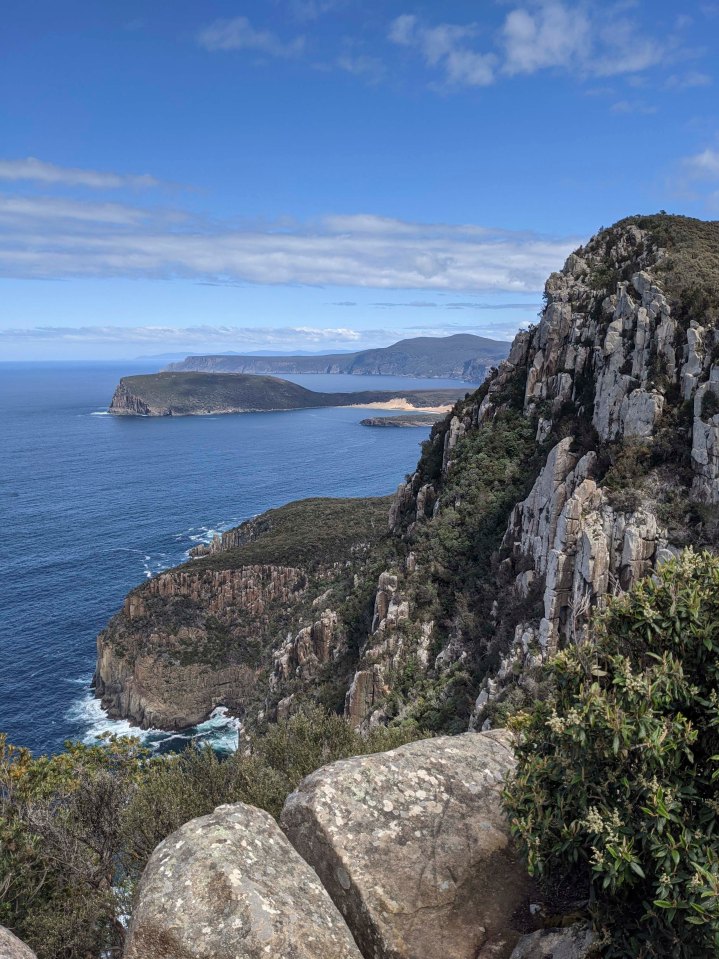 We emerged into the sunlight of our second day bleary eyed and feeling a bit worse for wear. 5/6 of our group didn’t have a particularly good sleep which probably comes from being on a foreign bed, in a sleeping bag, with a blow up pillow. I managed to locate a coffee pot in the second kitchen and went about making a brew. There were a few seconds of panic this morning when it appeared that we’d be unable to caffeinate due to a forgotten Aeropress.

The hike started pretty rudely with an ascent of Arthurs Peak. Unladen it probably would have been an easy climb but with an extra 15kg on my back it was a workout. As we walked I thought in retrospect that it would have been good to do some training with weight on my back, my legs were on fire and I was relying very heavily on my general strength from cycling to get me through. We still enjoyed it, it was honestly hard not to with the number of flowers, little creeks, and the occasional view out towards the ocean. We stopped at all 4 story seats learning about scats, fire, and the “messy” Tasmanian forests.

The first stop after the hill, Jurassic Crack, offered us views back towards Mount Brown. While sitting at the lookout enjoying the amazing coast we saw 3-4 humpback whales frollicing, and I spotted a pod of dolphins playing the the swell. We spent ages just looking out over the ocean taking it all in and trying with various levels of success to use the 2 sets of binoculars we brought along. As we walked back down the hill I spotted a mountain dragon sunbaking on a stone, I called everyone over to have a look and as we were bending down it decided to run full speed directly at one of my friends. It was very amusing.

We followed the coast around the edge of the cliffs passing through a couple of unexpected patches of wet forest that are caused by the sea cliffs sucking up cold air, condensing it, and keeping these isolated areas damp and cool. The path continued and the forest opened onto the low windswept heath that was absolutely covered in stunning wildflowers as far as the eye could see. Another critter was noticed off to the side of the boardwalk and we all stopped to have a look. My first thought was that it was a rat (gross) but on closer inspection, and it allowed us to get ridiculously close, we realised that it was an Antechinus!

Eliza brought out the Jet Boil at ‘Where the ‘ell are we?’ and we learnt about the initial bushwalking team’s attempts to cut a path through the cape between 1965-67 while having tea/cuppa soups. We spotted yet more whales and quite a few different birds. For my lunches I bought tuna packets with a variety of flavours/additions. They were pretty heavy (260g each) but absolutely delicious and just what I needed to fuel the walk. I can definitely recommend them.

Further along the trail we found ourselves once again surrounded by trees and enjoyed our last two story seats ‘Love in the Woods’ and ‘The High Life’. The high life seat prompted us to try and create our own Haiku poetry while we sat looking up the the birds in the canopy. I can’t remember mine exactly but it went along the lines of…

After what felt like miles but was only probably 1km we reached Munro and what a spot it was. The cabins were arranged around a more centralized communal area, there was a hot shower, heaps of sunny decks, and a whale watching platform complete with binoculars. A few of the groups were doing some yoga, others were lying in the sun, we opted for a stretching session, showers, and a dinner of spag bog before turning in for the night.