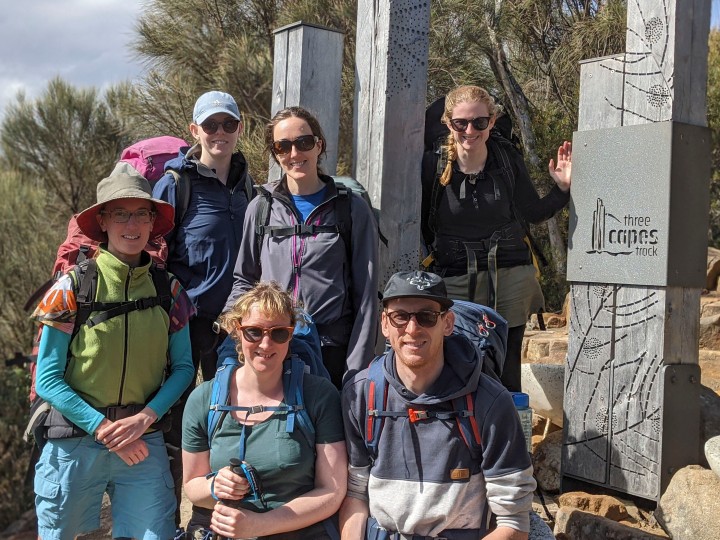 Our final day of the walk started like all the others, it’s interesting how quick we’ve settled into a routine. The 3 slower walkers (myself included) also happen to be the earlier risers so we get up, make ourselves a coffee and breakfast before the other group emerge. We roll up our sleeping bags, wipe down our mattresses #COVIDSAFE, repack our backpacks and then off we trot.

It wasn’t long out of the plains of Retakunna before we hit the steepest and longest climb of the 3CT, Mount Fortescue. Last night the ranger had told us not to get worked up about it because it looked worse than it was but let me tell you after 3 days of solid hiking it was pretty damn hard. Fortunately my legs, which yesterday evening were worse than useless seemed to have recovered and with a couple of story seat breaks we managed the climb with the second half of our group catching us just as we got to the top. Mount Fortescue was really interesting as it was a rainforest environment (something we had not expected to see on this hike) complete with huge ferns and ancient myrtle trees. It was quiet, dark, and mossy.

After regrouping we began the downhill run to the track junction to complete our second Cape of the walk, Cape Hauy. The reason it is called 3 Capes but only 2 are walked is the plan was originally to make a 6 day walk incorporating Cape Raoul but it wasn’t to be. I’m happy to still count it was we did get an amazing view of it from our first camp. The path continued through the rainforest for a time before climbing out into a more normal eucalypt forest with views of the cliffs along the way. The weather was highly changeable and I felt like I was constantly adding and removing layers as we went.

We reached the track junction right on schedule and stopped in the clearing to have lunch. This was the first point on the track that there was unfortunate evidence of other people, an orange peel left on the ground, toilet tissue spread through the bushes. I’d like to be able to blame tourists but since the borders are closed and the rubbish was fresh it was clearly locals doing the damage. I’d like to think my fellow Tasmanians would have more respect for the environment. If you’re bushwalking please don’t forget if you pack it in, pack it out.

We left our backpacks in the clearing, put on our day packs and headed out to tackle the 2,500 stairs out and back to Cape Hauy. It was hard going but at a leisurely pace and stopping to look at the Leek Orchids and numerous skinks it was manageable. I was pleased that I managed to get to the very end and nearly took a sneaky peak over the edge. This walk has bizarrely made me much more comfortable around cliffs, maybe I’m just getting used to them.

On the way back I took the lead, I think mainly thanks to my cycling quads and glutes giving me a big advantage when it came to uphill stair climbing. I had a sea eagle fly over my head and just as I was nearing the top a beautiful little echidna popped out of the bushes and started eating ants out of the stairs in the track. My friends caught up a few minute later, just in time to see Mr Echidna waddle into the bushes having eradicated the stair of ants.

The final section of the walk went very quickly with only one story seat and a photo stop to complete the journey. The 3 faster walkers rushed down to Fortescue Bay for a swim, I tramped along in the middle of the pack, not super keen for a dip. I made it just in time to strip down to my undies and jump in the water making it just up to my thighs before the sting of the freezing Tasmanian sea was too much. 50% of our group fully submerged themselves. So hardcore!

On the bus ride back, eating a block of chocolate carried the entire way, we reflected on the time we’d spent on the walk. The general conclusion was there were too many amazing moments to have a favourite and it was a fantastic experience. None of us wanted to go back to work but instead would have loved to continue for a few days.

For me personally I think the walk gave me a lot of perspective on my life and what I want to do with it. At the moment both Matt and I are really money driven so that we can go on our trip around Australia and have enough set aside to reestablish at the end and that’s ok for now. But living out of a bag on my back for 4 days and feeling the best I have all year made me appreciate that there are other kinds of wealth than financial and perhaps the 9-5 multi home owning slog isn’t really for me. I have a feeling that living 12+ months out of a van is just going to condense those desires.

Do I recommend the Three Capes Track? If you’d asked me what I thought when they’d just finished it I’d have ranted at you about the privatisation of the wilderness, about how Tasmania should remain untouched and unspoiled. But now, having walked the track for myself, witnessed the beautiful buildings, the pristine track, seen the caretakers put in so much effort to look after the environment and instill a love of it in people that would otherwise been unable to access this part of Tassie, 100% I support it, and even with the $495 price tag I would do it again. I have no criticism it was just spectacular.

If these posts have inspired you to try it for yourself, all the information and bookings can be made at www.threecapestrack.com.au.