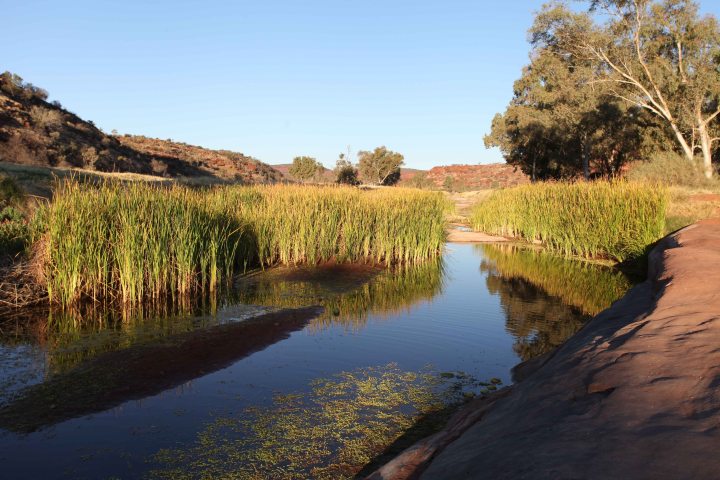 Thanks to Mr Budgie we weren’t even remotely near where we’d planned to be on the date that we departed Alice Springs so we sat down and worked out an alternative route for the next 10 days. Instead of backtracking to the Fink Gorge we decided that it would be better to drive out to the West MacDonnell Ranges (Tjoritja) and go the long way around back to the gorge.

The Macs, as they are known locally, are a 644km long series of mountains that cut Alice Springs almost perfectly in half (divided into East and West). They were named after Sir Richard MacDonnell (a previous governor of South Australia) by the explorer John Stuart who “discovered” the range in 1860. The ranges lay claim to the 5 highest mountains in the NT and are approximately 300-350 million years old. Realised pretty quickly they are also an incredibly popular tourist location and the busiest place that we’ve been so far this trip.

Because there is so much to see in the area we decided to keep it simple and just work our way across from right to left stopping at the destinations that interested us. We skipped Simpsons Gap with the intention to visit it later making our first stop Angkerle (Standley Chasm). We were more than happy to fork out the entry fee of $12pp to the traditional owners as Angkerle is the most dramatic of the numerous chasms in the range. The red quartzite walls towered 80m above us with the gap itself only 8m wide. Continuing along the road we came upon our campsite for the night at Ellery Creek Big Hole intending to go for a swim in the beautiful waterhole amongst the cliffs and trees. Despite the warm and sunny weather it wasn’t to be, enthusiastically splashing into the water we were greeted by the most freezing liquid I’ve ever put my feet into. I used to surf in Tasmania in winter and have had numerous ice baths in my time and it had absolutely nothing on this water. It was that cold it made my bones ache. I managed to get up to my butt and Matt hit the middle of his shin. We decided to spend our time more wisely by sitting on the sand and reading our books in the sun until it was time to go back and make dinner then head to bed.

The next day we woke up reasonably early and made our way back to the waterhole to watch the birds come into drink. We saw grebes, painted finches, budgies, a kingfisher, various honeyeaters, and some very nice Black-fronted Dotterels. After breakfast we went on the Dolomite Hike an enjoyable short but varied walk. Our first stop for the day was Serpentine Gorge, as the name would suggest this narrow and shady gorge snakes its way through the range and towards the horizon. We were feeling a bit lazy so we did the lookout walk and wandered into the waterhole. On the way back Matt spotted a Little Button Quail and I spent 20 minutes trying and failing to photograph the tiny, speckled bird. We popped into the slightly uninspiring Ochre Pits for lunch (the Lyndhust ones are so much better). By this point I was feeling pretty rubbish, tired with body aches thanks to my second Pfizer vaccine I’d had the day before so instead of going into Ormiston Gorge for another hike we pulled up at a stunning little campground called Big Gum. I’d just got comfortable in my hammock for a bit of R&R and Panadol when Matt pointed out a group of women that were struggling in the soft sand a couple of campsites over. Matt wandered across and suggested that they reverse into a bit of harder track. Well they floored it in reverse and wedged themselves straight in a dune. Thinking that we might have to tow them out we drove Egg over and set about digging in and placing our recovery boards. Matt jumped in the drivers seat and got the car out and back on the track, with a push from me and the girls. So much for a restful afternoon!

Following a peaceful night on the river we ended up back tracking to Ormiston Gorge. At one of the other campgrounds we’d been told that the Ormiston Pound Circuit hike was one of the best in the ranges and couldn’t be missed. It was stunning. I feel like I’m saying it every single post but this walk was and remains my favourite of the trip so far. We started quite early as the temperatures are pushing into the mid thirties most days now. The first part of the walk followed a creek and then climbed over a short rise where about 20 Spinifex Pigeons called home, we continued climbing steeply to a lookout then around a ridge, down the other side, and a bit further along into the gorge. The final part of the hike is a wade through the waterhole and then an easy stroll back up to the visitors centre. We ended up having lunch in the little attached café which was great, the food was nice but a Western Bowerbird popped in for a visit and I managed to get a photo of the bird that I’ve been looking for during the past 2 weeks! A short drive down the road we made camp at Redback Gorge, a clean site with an outlook directly onto Mount Sonder. The campgrounds were quite small and close together but almost all the people staying there were getting up at 4am to climb to the summit making it a very quiet evening.

Not being as enthusiastic about mountain climbing in 35 degrees as our fellow campmates Matt and I decided to complete the cheats option and rather than going the whole way up walk the first (and hardest) 2.5km to the saddle of the mountain. Due to the shorter length rather than starting at 4am we commenced the climb at 8am and what a climb it was. 2.5km of stairs made from stones without more than 100m of flatish track to shake out the legs was much harder than I thought it would be. Sweaty and pooped we reached the top and were rewarded with outstanding views of the range and the summit of Mount Sonder, it was worth the effort. Back in the carpark we barely had time to catch our breath before we were back on the road and driving towards Tnorala (Gosses Bluff). The 4WD track into the reserve was just corrugated enough to make things difficult and we bounced along until we drove through an opening in the cliffs and into the comet crater. We were both completely taken by how big the hole in the ground was, how obvious it was that a comet had smashed into the earth and that we were allowed to drive directly into the middle of it! We did a hike around the middle and a small, short climb to a lookout.

I’d really like to write that we didn’t visit Hermannsburg for a third time, especially since we had more of enough of it the first time but we did…and we went back to the biased mission for lunch. It’s almost become a routine for us now, Hermannsburg, fill up with fuel while trying to work out if the other cars are parked or abandoned, fill up the water next to the footy oval without a single blade of grass while dodging the rubbish, then go and spend money at the mission that did so much to “help” the local indigenous population. If I never visit there again it will be too soon and the government should be disgusted that there are towns in Australia that look in worse condition than those in third world countries, it’s honestly disgraceful. Anyway, enough of my political ranting we left town, turned left and finally returned to the Fink Gorge. I turned to Matt and said “should I just try and avoid looking at animals so we don’t have to rescue any this time?” he responded with a resounding yes.

At the entry to the Fink Gorge is a sign, it says something along the lines of do not attempt this 4WD track if you are inexperienced, don’t have a PLB or EPIRB, don’t have enough food or water for several days, don’t have recovery equipment and so on. It is a very scary sign that made me want to turn around and go in the opposite direction even though we have all of the required things listed. You’d think the track would be an absolute nightmare based on it but no, as far as 4WD tracks go it was pleasant and easy, I drove on worse things doing my course in Tassie. The hardest part was that the soft sand combined with the very slow speeds and heat meant Egg was getting very hot and bothered by the time we pulled up. With the smell of hot engine in our noses we took our chairs down to the river and sat in the cool water while the gorge walls turned red and the birds came into drink. Lovely.

Ellery Creek Big Hole – The waterhole was lovely but the campsite was squashy and there were some idiots the night we stayed. One guy was blasting music from his car and then went and slept on the ground next to the waterhole, another wouldn’t stop flying his drone around. $4pp/pn – 6/10.

Big Gum – 4WD only and I can not emphasis that enough, we were watching people in 4WDs get bogged not only on the tracks but in the actual campsites. Powder soft sand but worth it for the river, trees, and whistling kites. $Free – 8/10.

Redbank Gorge – If you enjoy campsites with a view this place is for you. Mountains and more mountains with a gecko in the toilet and very considerate fellow campers. $4pp/pn – 8/10.

Morwell Fink River – Beautiful, peaceful next to our own private bit of river/waterhole. There were a lot of bugs at night but we got rid of them with a decoy light and the rest were eaten by a resident bat that flew over us multiple times. $Free – 8/10.