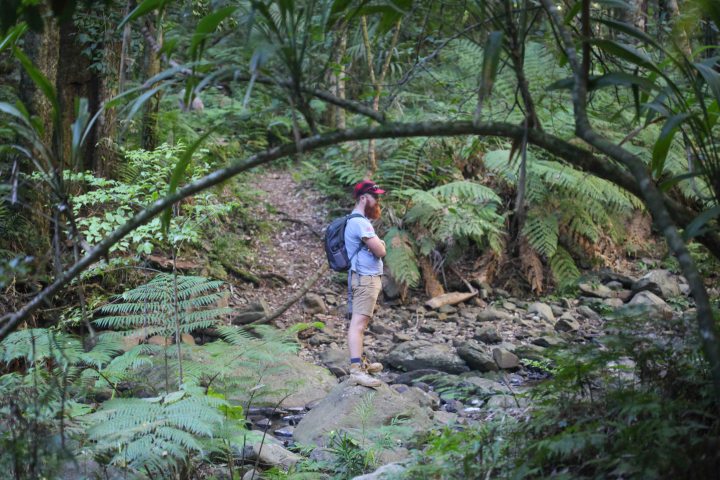 I’m lucky with a lot of things in my life, I have a great job, caring husband, house to live in and never have to worry about food on the table but the one area where I lucked out on a bit was my health. I’m one of the 1 in 10 Australian women with endometriosis. Yay! Bit of a TMI but I’m telling you this because if I didn’t have surgery and end up taking too much leave I wouldn’t have been able to go on this van trip so there is a silver lining.

For something different and because we were both on leave we left town in the middle of the week after I’d finished catching up with my dietician. We drove out to Main Range National Park picking up some firewood on the way and set up camp at Poplar Flat.

Despite the recent slicing and dicing I felt really good in the morning so we headed out on a bushwalk on the 6.5km Cascades Circuit Track. It was a beautiful hike with multiple creek crossings, ferns, and tropical palms stretching into the canopy. I was particularly enthralled by the huge birds nest ferns up in the trees, make sure you look up!

After a rest in the campsite and a bit of lunch we took the van out for a short drive to the Mount Castle Lookout. Certainly worth the 900m of steep walking track to peer out across the valley and towards Brisbane.

Back at camp we spent a lazy afternoon lying around in the hammock, reading books, starting a fire, and discovering the wonders of getting flat breads to crisp up over flames (delicious).

On our way out the next day we stopped in at Lowies for a pizza snack. Lowie was an absolute character, he’d built his fantastic cafe/restaurant entirely from scratch with his sons help. I could have spent hours there talking to him and going over the amazing details of the building and the odds and ends scattered around. Matt ended up buying a book which amused me. In the entire time we have been together I think I’ve seen him finish two books which he has now outdone in the few months that we have had the van.

Heading towards Brisbane we decided to swing by the Spicers Gap 4WD track for a bit more off roading. After a quick bit of research most sites rated it as easy so we figured that we would be fine. Oh my word I do not know on what planet that road is ‘easy’ but it certainly wasn’t this one. The track was rutted beyond belief, like lose-the-side-of-your-van if your wheel slips into it ruts that I think would have been up to my waist if I found the urge to stand in the mud at the bottom. When the road wasn’t rutted it was unbelievably steep and rocky, or was littered with woah-boys that had a side-step-scraping gradient if you approached them on the wrong angle. Absolute madness but to Matt’s credit he handled it like a complete legend, and to Eggs credit they made it look easy (I contributed nothing apart from being nervous and getting out a few times).

We stopped at the top and took in one final lookout view from Governors Chair before slowly making our way back to Brisbane.

Add: Turns out Spicers Gap road nearly caused the transmission to fall out of Egg. We took it to the Delica Garage for a service and 3/4 mounting points were broken…eep.

Poplar Flat – Another lovely Queensland National Parks campsite and as the name would suggest pretty flat. There were lots of really nice spots and we were very happy with our area hidden away in the trees. There were drop toilets but no showers. $6.15 per person per night 7/10.

So you’ve decided to travel around Australia now comes the most important part. It’s not trip planning or budgeting, it is picking your vehicle. Matt and I are intending to travel for 12+ months so for us buying something was the easiest and most budget friendly option. For shorter trips there are many companies that will hire out vans and cars for travelling around Oz or you could try your luck with buses and trains (few and far between).

Most of the blogs I read about this process are very sensible. They say not to buy the cheapest thing that you find and not to get something just because it works for your #vanlife aesthetic. Instead it recommends looking at sites like Gumtree regularly and preparing yourself to drive a lot of duds before finding The One. That did not happen for us. One morning in May for some unknown reason we were both on Gumtree, both looking for campervans and Matt found it, our perfect van, a 2005 Mitsubishi Delica 4WD, the ultimate adventure machine, 141,000 on the odo annnnnd it was converted as a campervan. Unbelievable luck.

The Universe had dropped this van in our laps and we had to see it so we organised a meet up with the German couple that had bought and converted it that night. Matt took it for a quick spin, we looked over it, and decided to buy it. A glorious white van that the Germans had dubbed “The Egg” because it looks like an egg from the back.

There was one problem…finances. Matt immediately started applying for a loan and I ended up chatting about the situation with my friends, one offered to lend us the money while we sorted out the loan (and it is her alone that we can credit for enabling us to get our van, thank you). There was a rush on the purchasing because sadly the Germans had to go back home to care for a sick family member, their freshly converted van handed on to finance their home flights. 5 days after seeing The Egg for the first time we drove out to a random house near Ipswich and picked it up.

I can not reiterate this enough, follow the advice of the other blogs, take your time, think about what you want and try lots of different vans. Purchasing a $20,000 vehicle that The Universe has dropped into your lap is ill advised, I’m glad we did it every day but that is not the sensible way to go about things…then again we aren’t very sensible people.